Script is the written document for the animation

The format consists of three aspects: 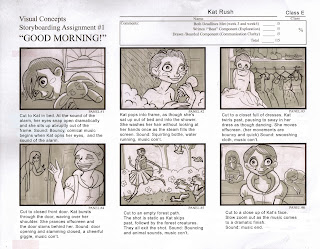 A Storyboard is a sequence of drawings that is used to help visualize the animation and to communicate ideas clearly. It details key events and scene changes in the animation, often accompanied by text notes describing what is occurring in the scene. It is often the first opportunity for others to experience a real impression of the animation before it enters the production stage.

The Storyboard helps to finalize the development of the storyline, and is an essential stage of the animation
process. It is made up of drawings in the form of a comic strip, and is used to both help visualize the animation and to communicate ideas clearly. It details the scene and changes in the animation, often accompanied by text notes describing things occurring within the scene itself.

Animatics are animated storyboards. They are used for various purposes depending on the medium for which they are being produced. Animatics are used every day in the advertising industry to test commercials. They're used to preview scenes of live-action films before they are shot.

Up until just a few years ago, animatics were produced by filming or videotaping storyboards. Over the last ten years, animatic production has become much more sophisiticated. Animatics are now produced with the aid of computer animation (2D or 3D), with special visual effects once reserved for high-end Hollywood productions.